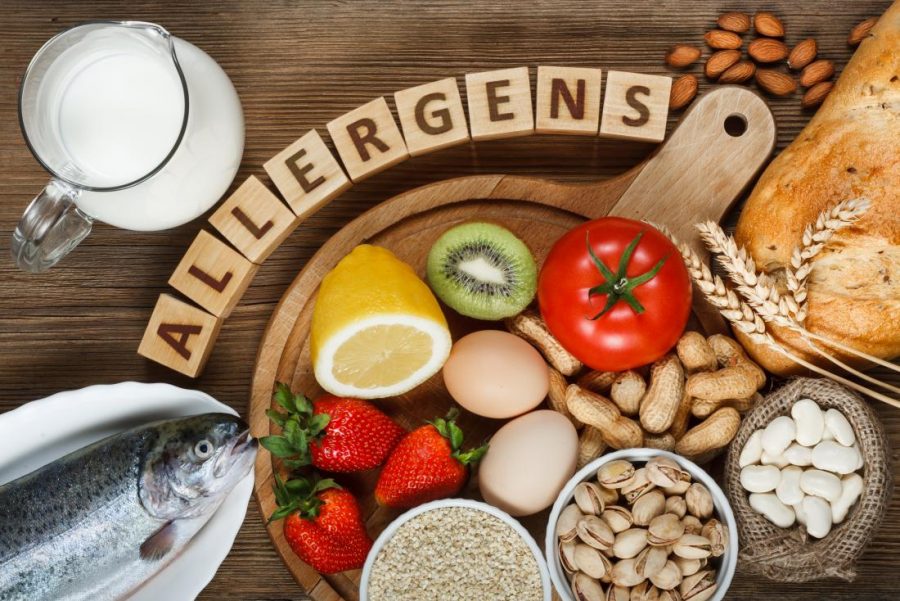 In the UK, an estimated 2 million people are living with a diagnosed food allergy, and 600,000 (1 in 100) with coeliac disease. It is not known why the numbers of infants and children with food allergies has increased in recent years. This is not only about better detection. Unfortunately, this includes more cases of serious life-threatening allergies such as to peanuts or sesame. There are various theories for why this is happening, but we still don’t know have the definitive answer.

What are food allergies?

There is a difference between allergies and food intolerances. In a food allergy, eating even small amounts of the particular food causes immune cells to release chemicals such as histamine, (the reason why antihistamines can be part of the treatment). These chemicals can cause symptoms such as redness of the skin, swelling and itching. There may be a red blotchy rash, like a nettle rash or a wheezy chest. Food allergies can sometimes be less obvious however, and may cause more subtle symptoms like abdominal pain, bloating and loose bowel motions. If the symptoms come on soon after eating the suspected food or drink, it may be easy to make the connection, but sometimes they are delayed. Blood tests can also be helpful in making a diagnosis.

This is a rare, but serious form of allergic reaction. It can happen in children or adults. Anaphylaxis may occur not only after certain foods, but also in some people it can be triggered by medicines such as penicillin, vaccinations or anaesthetics, or after a bee or wasp sting. Once anaphylaxis has happened to a certain food, medicine or sting it is important to try to avoid exposure to this allergen for the rest of one’s life. If someone has an anaphylactic reaction they may get a nettle-like rash, and swelling of their face and mouth. Sometimes this can cause wheezing and breathing difficulties. Their blood pressure may drop very fast, causing them to collapse or black-out.

Most people who have suffered from anaphylaxis have been given an adrenaline injector pen, (usually a pair of pens) to carry with them at all times, to use if they have a serious reaction. If you witness an attack of this kind, you may ideally help them to find and use their pen and then immediately call for an ambulance.

Sometimes desensitisation may be used by a clinic to gradually reduce the severity of such allergic reactions. The allergy sufferer may be repeatedly exposed to minute amounts of the allergenic protein in a hospital environment under supervision, over several months. This treatment can in some people be life-saving, meaning that if there is a future unexpected exposure there may be a much milder response.

This is an autoimmune condition, (where the immune system is over-active), which is found in about 1 in 100 people. It arises in response to even very small amounts of gluten in the diet. (Gluten is a protein found in wheat, rye, barley and some other grains.) There can be symptoms such as abdominal pain, bloating, loose greasy stools, which may be hard to flush away and often weight loss. If coeliac disease is suspected, there are blood tests which can help the diagnosis and usually an endoscopy is needed, with a biopsy. It is important not to omit gluten containing foods in the run-up to the tests, or the diagnosis could be missed. Once diagnosed, it is important to stay off gluten all the time, to prevent long term health issues.

What is a food intolerance?

Food intolerances are often subtle, resulting in people feeling ‘off colour’ or ‘below par’ e.g. with brain fog, headache, indigestion, abdominal bloating, loose or stubborn bowels or tiredness. Diagnostic tests are usually normal. Finding the culprit food may be a case of ‘trial and error’, however common causes may include gluten or dairy products. With an intolerance it is often possible to eat small amounts of the suspected foods from time to time, without suffering more symptoms. A nutritionist may help guide you on an ‘elimination diet’ to detect which food or foods are causing the symptoms.